I'll give you a cookie if you're nerd enough to place that quote. In the mean time I'm going to attempt to write something informative. Wish me luck.

I keep a shrine to Hecate in my bedroom, which, since I honor her in all my rituals, also serves as my altar most of the time. I'd love to have one outdoors at a crossroads, but neither do I have a crossroads where it wouldn't be a vandal magnet, nor do I have the money for stone statuary.

So I do what I can with what I have, and here's picture. 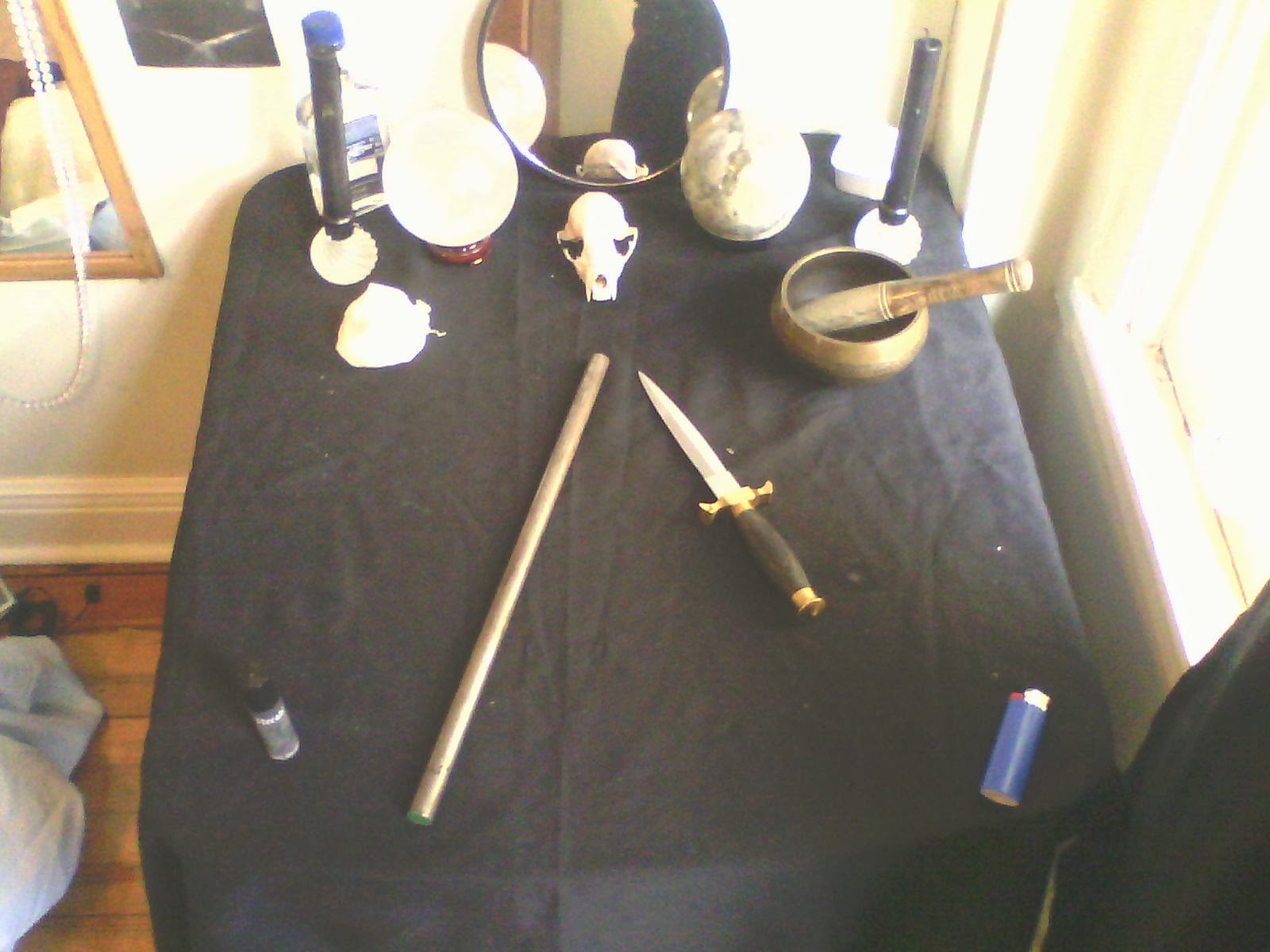 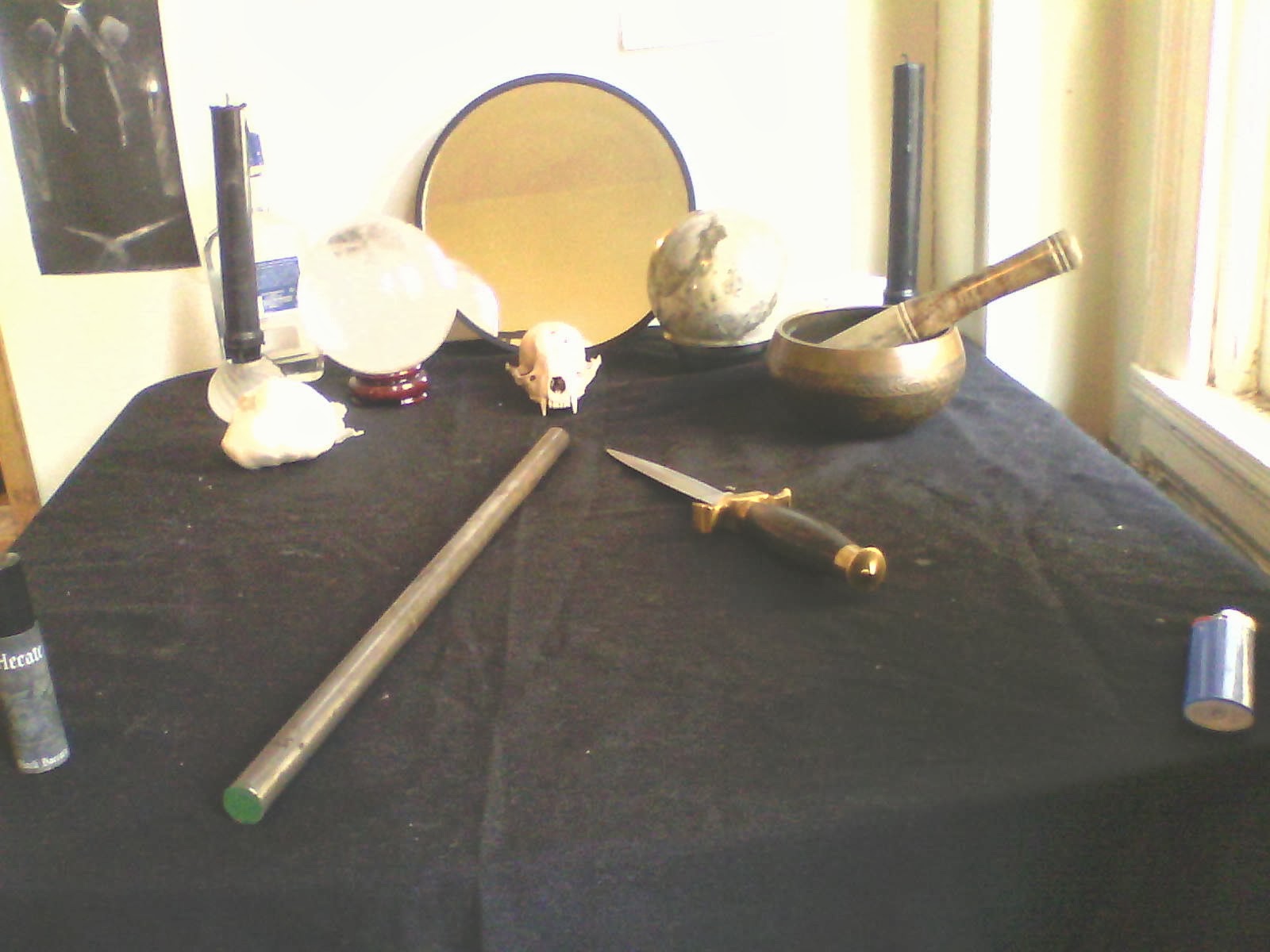 There are a few items I'd still like to add. Most notably an actual statue of Hecate, and (in terms of using it as an altar) a proper chalice. This is what I have to work with at the moment. The informative part will be explaining the meaning of each piece.

You will notice the small picture attached to the wall, a painting of Hecate I acquired, in lieu of a statue I can't afford right now.

The back and center of the shrine is dedicated to a mirror. Mirrors serve as gateways between realms and are useful for spirit communication, astral travel, and scrying, all arts within the purview of Hecate.

The corners of the shrine hold representatives of the four elements. Hecate is the goddess of that which is outside of normal social order, patron of the outcast, and we are bringing old traditions into a new world, so I use very non-traditional elements. The small box in the back right corner contains graveyard earth. The right front is a lighter, for fire obviously. The left front is an all natural perfume made by a pagan crafter to represent Hecate, for air. In the left rear is a bottle of everclear, aqua vitae, for water; which has been used only to bless ritual tools.

Two black taper candles represent knowledge and wisdom, or truth and understanding, depending on your interpretation. They stand in for the two torches which Hecate herself often wields.

The quartz orb to the left of the mirror is a powerful multipurpose tool. Quartz can be charged for nearly any intention. I use this one as an aid to spirit communication and channeling.

The opposite side, a marble orb, holds the power of grounding and emotional balance, and is helpful for grounding at the end of particularly intensive work. It bears an interesting story. A friend of mine (who may name himself if he likes) saw it while doing a reading for me and said it was important, asked me to tell him when I found it. Another friend immediately went and retrieved it from his car, a stranger dressed as a gypsy had approached him in a grocery store park and given it to him with no explanation, after which she apparently disappeared from an empty parking lot.

The skull, yes I'm sure you've all been wondering about that one. I'm not an expert on comparative anatomy, but I'm told it came from a young coyote, died of natural causes in Wisconsin. I have two of them. Canines are first among the sacred animals of Hecate, so I honor them on her shrine, and given my focus as her priestess on necromancy and restless spirits, there is an elegance to displaying a skull this way.

Left and forward of the skull is a Garlic bulb, one of the plants sacred to Hecate. Garlic is powerful plant for psychic protection, and commonly used (largely due to its ubiquitous nature and edibility whereas most of her sacred plants are medicinal/poisonous) in offerings.

Opposite the Garlic is a Tibetan singing bowl. As far as I can ascertain this one of the original singing bowls, imported from Tibet and made centuries ago using metallurgical methods which have since been lost to time. Fortunately for those of us who seek such items, they have also been well cared for ever since.

To the left and center of the altar is one of my wands. This is a necromancer's wand, made of solid iron. It is used first and foremost to compel and banish the spirits of the dead. Blessed by Hecate, Hermes, Hades, and Persephone, a psychopomp (guide to the souls of the dead), a grave warden (guardian spirit of a cemetery), and six earthbound spirits; consecrated in the five elements, as well as with my own blood and in a ritual bonfire. By far the most powerful tool I possess.

Center right, is my athame. As I write this, a recent acquisition, a gift from dear friends, the last of many sold at an event in which I participated. The handle is bone, yes, black bone. I'm not certain if it's been dyed, or perhaps is bull horn. The athame is traditionally a double edged blade with a black handle, used to direct and channel energy such as in the casting a ritual circle. It is also especially useful in undoing what has been done, in the cutting of psychic bonds and breaking of previous spells.

So there you have it. Hope some little bit of information here has been helpful to someone.

Katharine Alice Jones
What is there to say about me? A Virginia native, raised in a psychic family, I've devoted myself to my craft for a very long time. I have for years made a career from my skills as a clairvoyant and energy worker. I am a Neo-Hellenic high priestess of Hecate, and I specialize in the dark arts. It is my magnum opus to teach that the "dark" can be used for positive works.